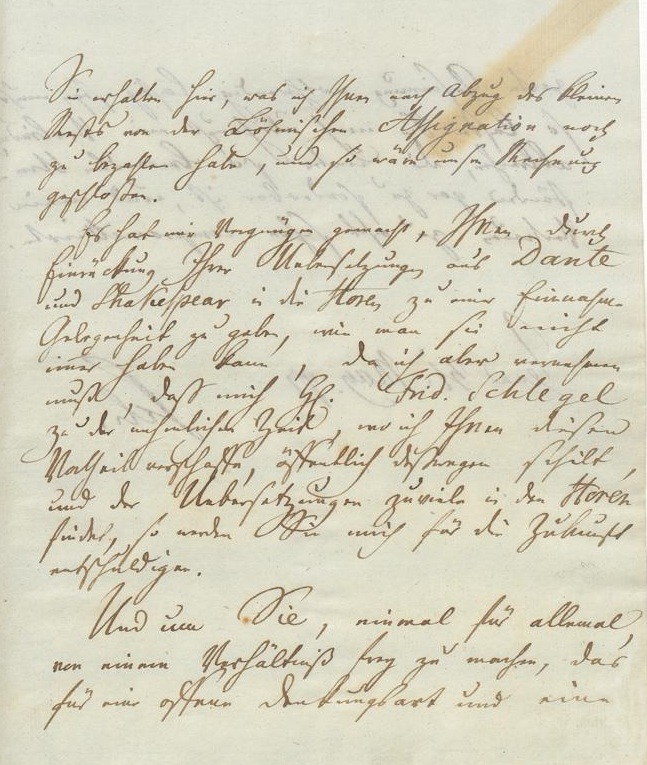 August Wilhelm Schlegel (1767 – 1845) was one of the most important and renowned scholars of the founding period of the Rheinische – Friedrich – Wilhelms – Universität Bonn where he worked as professor of Literature from 1818 until his death in 1845. Schlegel is regarded as the (co-) founder of English literature and language studies, Indology as well as comparative modern linguistics. His literary estate has been situated in Saxon State Library – State and University Library Dresden since 1873.

Bonn University and State Library possesses about 340 letters from and to August Wilhelm Schlegel, including letters from Johann Wolfgang von Goethe, Friedrich Schiller and Wilhelm von Humboldt, which Schlegel had handed over to Bonn University Library before his death. These letters are situated in a small part of Schlegel’s literary estate, in Bonn and in other literary estates as well as in holdings of the manuscript department.

Worldwide about 4000 letters from and to August Wilhelm Schlegel were handed down. These correspondences are brought together in a joint project supported by the German Research Foundation (Deutsche Forschungsgemeinschaft) in a digital edition. For this purpose the already printed letters, letters from Dresden’s main literary estate and correspondences kept in about 80 other institutions will be included. Bonn University and State Library participates in this project by cataloguing and the digitisation of the letters located in its holding. Furthermore, additional material of Bonn’s literary estates of August Wilhelm Schlegel’s as well as his legal adviser Jakob Lamberz (1779 - 1864) will be developed, digitised and will be launched online in the digital collections of University and State Library Bonn.